Ephesus was an ancient port city whose well-preserved ruins are in modern-day Turkey.

According to one legend Ephesus was founded by the Amazons, a tribe of female warriors, and that the city was named after their queen, Ephesia.

Ephesus was a thriving center of Hellenic civilization.

By 100 AD Ephesus became the largest Asian city in the Roman Empire with an estimated 500,000 residents.

Earthquakes and foreign sackings in the Byzantine era contributed to its demise.

More From: Pets on Marble 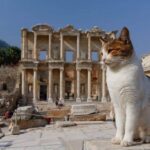