The well known, according to mythology, children of Hera

Ares: god of war; in some versions of mythology he is considered the son of Hera and Zeus

Eileithyia: goddess of childbirth; considered the daughter of Zeus and Hera in some mythology

Ἐνυώ- Enyo, a war goddess; works alongside Ares in the destruction of cities and in war, according to Homer she is the equivalent of Eris

Eris: goddess of discord; in certain mythology she is the equivalent of Enyo and, therefore, considered the daughter of Hera and Zeus

Hebe: goddess of youth; in rare versions of her story she was produced by solely by Hera after Hera consumed lettuce

Hephaestus: god of fire and the forge; after Hera gave birth to Hephaestus she was disgusted by his ugliness and threw him from Mount Olympus. He was said to have gotten revenge on his mother by cursing her throne and never allowing her to leave. The curse was eventually broken after Dionyus got him drunk and tricked him into releasing Hera

Typhon: serpent monster; according to mythology Hera bore Typhon on her own because she was angry at Zeus for the birth of Athena, one of his many illegitimate children 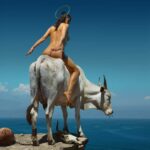