Ariadne, daughter of King Minos of Crete, helped the Greek hero Theseus escape from her father’s infamous Labyrinth, but Theseus abandoned her soon after on the island of Naxos. She was rescued by Dionysus, god of wine, who is seen here rushing in from his ship. He honored her by flinging her crown up into the sky, where it became a constellation of stars. The figures in Eustache Le Sueur’s paintings have a cool monumentality that suggests sculpture; the pose of Ariadne comes from ancient Roman sarcophagi, and that of Bacchus from the renowned classical statue, the Apollo Belvedere. The canvas, from about 1640, now in the Museum of Fine Arts in Boston, was perhaps commissioned by Marie-Jeanne Bécu, Countess du Barry, the last great favorite of Louis XV of France. 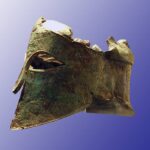 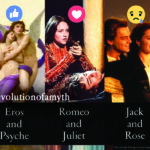