Pompeo Girolamo Batoni’s “Venus Presenting Aeneas with Armour Forged by Vulcan” is the companion piece to “Hercules at the Crossroads”, and is very similar to it in composition. The blue-clad, armed figure, the putti and Venus are constants in terms of both form and content. The goddess is now central to the composition, in a pose similar to that of Hercules. Following the story in Virgil’s “Aeneid”, she offers her mortal son Aeneas weapons forged by Vulcan so that she can be at his side in his imminent and crucial battle against Mezentius. The loving detail in Aeneas’ shield is a reminder of Batoni’s training as an artist in his father’s gold workshop. The meticulous style and the importance of drawing clearly show that Batoni was originally a miniature painter. Remarkably, he never attempted the monumental dimensions of a fresco, which was highly unusual for a major eighteenth-century painter. He preferred a manageable format, which he handled with care and a profoundly painterly quality, as he does here. This and the lyrical expressiveness of his elegant figures make his compositions decorative in the best sense of the word. 1748, oil on canvas, Liechtenstein Museum, Vienna. 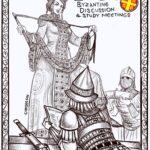 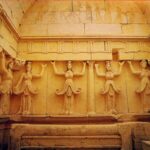