Artemis was the daughter of Zeus, king of the gods, and  Leto.

When Hera, the sister-wife of Zeus discovered that Zeus had impregnated Leto, she cursed Leto not to find a solid ground or island on earth to give birth to her children.

In labor and massive pain, Leto wandered all over Greece to find a place to give birth until she found Delos, a barren and floating island.

According to myth, it was Zeus who emerged Delos from the sea so that Leto would find a place to bring forth her off springs Artemis and Apollo.

The delivery of Artemis was painless but the birth of her younger twin Apollo was painful and treacherous because by then Hera had kidnapped Eileithyia, the goddess of childbirth.

In the absence of Eileithyia, Artemis, having been born first, played the role of a midwife and assisted her mother with the birth of her twin brother Apollo.

It is due to this myth that Artemis was worshiped as one of the primary goddesses of childbirth and midwifery along with Eileithyia. 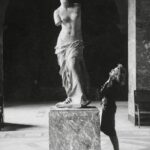 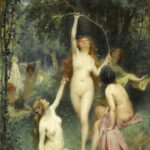