The Birth of Venus

Aphrodite or Venus to the Romans is thought to have been born near Paphos, on the island of Cyprus.

Uranus and Gaia had a son named Cronus.

The parents fought and Gaia created a stone sickle, which she gave to Cronus to attack his father.

Cronus castrated Uranus and threw his father’s testicles into the sea.

They caused the sea to foam and out of that white foam rose Aphrodite, the goddess of love and beauty. 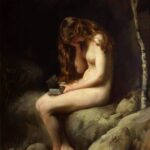