It is only in recent years that critics have considered Giuseppe Maria Crespi, born in Bologna on March 14, 1665, as one of the most notable Italian artists of the first half of the eighteenth century. He was a very eclectic painter: he made large altarpieces, still lifes and portraits.

The mixture of naturalistic attention and emotion contained in his works, combined with great gifts of luminism, gives Crespi’s work a great originality. This painting represents ingenuity, personification of the inventive spirit: the bow and arrow evoke his skill and his insight; the eagle and his coat of arms signify his generosity, the height and accuracy of his views.

It is also possible to see here the theme of victorious Love: it comes in the form of a beautiful smiling teenager who, with bow and arrow in hand, indicates himself with his hand, as the eternal winner of all that could distract us from love, especially from science and letters, symbolized by the book he rubs with his left hand and by the armillary sphere placed behind him.

The figure, seen from the waist up, stands out for its intense brightness against a neutral background. The whole composition blends with the monochrome and the color plays only on subtle shades of warm tones, which come here and there to liven up some colder touches. Everything seems to be built to showcase the character’s triumphant and dazzling beauty. Circa 1695-1700, Musée des Beaux-Arts, Strasbourg. 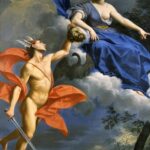 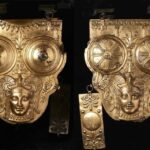